Surfboard design has a very long and interesting history. For centuries the surfboards were made of wood or tree bark and could weigh up to 50 kilos and measure up to 5 meters. It was not until the 1930s that surfboards became lighter and more manoeuvrable, allowing for wider adoption of surfing making it more popular and accessible.

Another important step in the evolution of surfboard design was the invention of surfboard fins. The fins were first installed on the surfboards in the 1930s, which allowed for better control and enabled the creation of new manoeuvers. Later on, in the 1950s, the use of new materials helped to make surfing even more popular.

After thirty years only, surfboard technology has evolved and boards became lighter, stronger and more affordable. New unreleased designs introduced by the shapers were emerging. Finally, the surfboard itself started to be considered an art object. 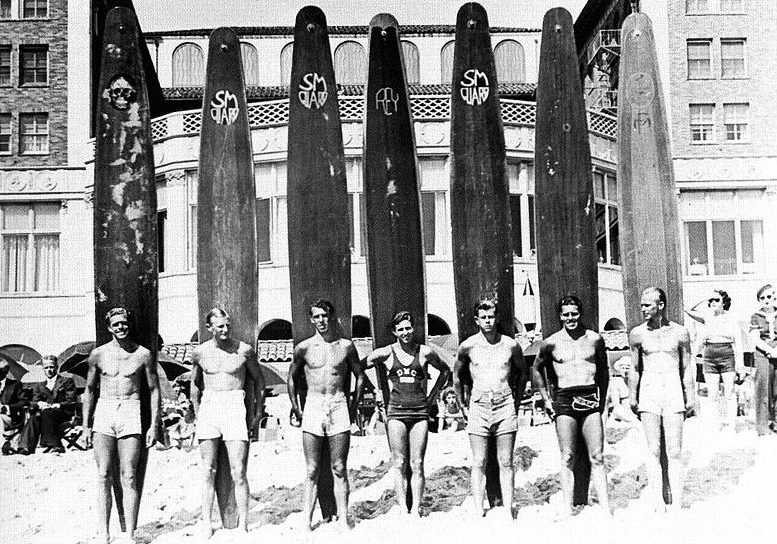 Thus, from the 52 kilos of Duke‘s surfboard, we moved to a surfboard which will weigh now only 3 kilos – quite far from the cut tree trunk. The shapers have been seeking long time to find the optimal surfboard design, according to different types of waves. The shaping of surfboards has become an art in its own right.

Different dimensions and shapes, even if they are only slightly modified, can lead to radically different results. Surfboards are custom made to suit different preferences, abilities, conditions, and styles.

Basic characteristics of a surfboard

It’s the distance from one rail to another. It also affects the paddling speed and stability of the surfboard. Furthermore, it has an impact on the turning ability. That’s why in surfing we talk about the width, length and the thickness separately. In windsurfing, only the volume of a board is the main measure, usually expressed in liters.

Length of a surfboard

It’s the distance between the nose and the tail, from the tail to the nose. It has a dramatic effect on the performance of a board, it affects paddling speed, riding speed and stability, so it is necessary to be well informed.

Thick surfboards are ideal for beginners and intermediates. Thickness helps surfers of all levels “float” on low waves. With a thick surfboard, you can keep speed even if you are far from the “pocket” (the steep region where the wave generates speed). The thickness may affect the performance of more advanced surfers, since it limits the maneuverability of their surfboard. The thinner the board is, the easier it is to dig the rails into the water

The outline, or template of a board, that is to say how curvy a board is or not. These curves are made according to the length of the board. The more curved is the board, the easier it is to manoeuver, but if it is too curvy and rounded, it will have no direction.

That is the back end of the board. There are many varieties, shapes and widths.

They mainly provide the ability to spin, speed and stability. There are many varieties of different shapes and widths. Fins give the board direction, they let the board hold on the open face of the wave.

The shape of the nose can be pointed or rounded and affects the entrance to the wave.

The shape of the rail affects the speed and stability of the board, as well as the turning ability.

The Rocker of a surfboard

The upcurve of the tail and the nose. More rocker makes the board slower, but it also lets you take steeper waves. In general, advanced surfers, use surfboards with more rocker, while beginners and middlers prefer more “flat” or “straight” surfboards. Rockers also help advanced surfers perform manoeuvres in the critical parts of the wave, where the wave has a strong curve.

The determining element in the strength of a board.

Concaves are perfect for advanced surfers looking for speed and performance. However, this type of board is ideal only when there are good conditions, because the rails bite well in the water, which allows you to make a better bottom turn.

In less good conditions (choppy), it’s more difficult to surf. A flatter, non-concave surfboard is ideal for beginners because it allows you to surf small, weak and choppy waves while maintaining your speed.

The small wood band incorporated all along the board, acting as a spine. One of the main components of a surfboard, it’s essential for the solidity of the surfboard. The shapers pay special attention to this component and continue to innovate to make the sport evolve. All the surfboards don’t have the same stringer. Some have several, including a longboard, which allows more rigidity and strength in the board and thus prevents the board is too flexible.
Today, some surfboards made of epoxy and polyurethane do not even have stringer anymore. Surfboards design continues to evolve. 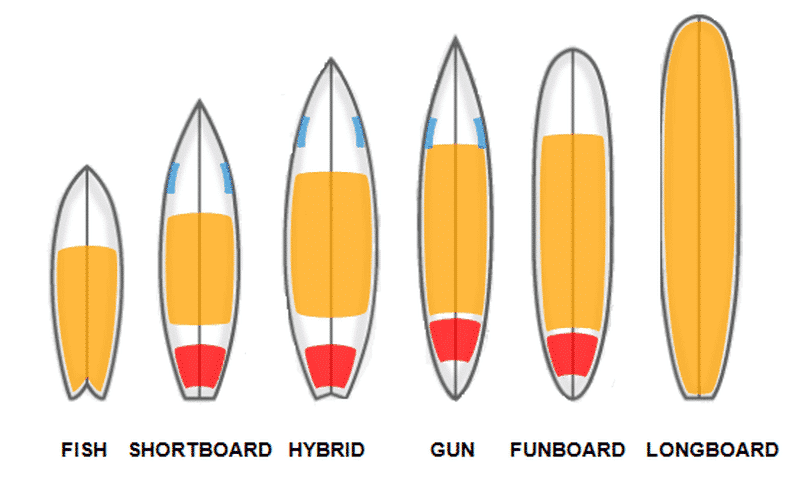 All these elements can be combined in different ways to create various types of boards; here are the most common:

Pointed  in the back end, which holds the wave well even when it forms a real wall of water. The pin tail is mainly found on gun-type surfboards, which are ideal for large and powerfull waves forming tubes, where the surfers don’t need much maneuvering and turning. This type of surfboard maintain direction on powerful and abrupt waves.

More versatile version of pin tail and round tail, ideal for medium sized waves. It offers more stability and speed.

This board has more volume than a pin-tail board, which means a board that is faster and easier to turn. A board that follows the curve of the wave, is very handy, which allows for great stability in hollow and fast waves. The round tail is ideal for big sharp turns, and to maintain your speed even in soft waves.

The round tail can help you to surf bigger waves with confidence without losing in maneuverability. This surfboard is popular on shortboards were maneuverability is key.

One of the most versatile and common forms of tails. The square corners allow for quick and precise turns on the bottom of the wave (Bottom Turn) while the round corners allow a good hold on the wave.

Very responsive board that keeps the speed in waves a little slower. Ideal also for medium / large waves. Very common on shortboards.

Wider than most other tails which allows the board to gain speed without sacrificing traction on the wave. Board that has the rear swallow tail, which acts as two tail connected which allows better control and stability. Handy  in small to medium sized waves that allows for powerful turns.

Another version of the swallow tail, more rare, which allows a central point of contact with the water.

Ideal in slow sections of a wave because this type of board hovers quickly on the water while offering a great stability. Also allows short and tight turns. Board that goes well with a radical and aggressive surf.

Fins have also seen lots of evolution. It was Tom Blake who was the first to create the “Single Fin” back in 1934. Thanks to this, we have been able to surf the waves sideways, following the open face of the wall.

The first surf fin was made of wood, covered with resin, thin and thick. Then came the drift resin and fiberglass, which made the surfboard fins stronger and more flexible. 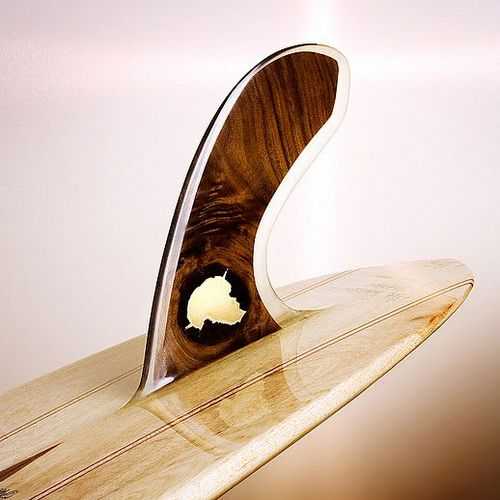 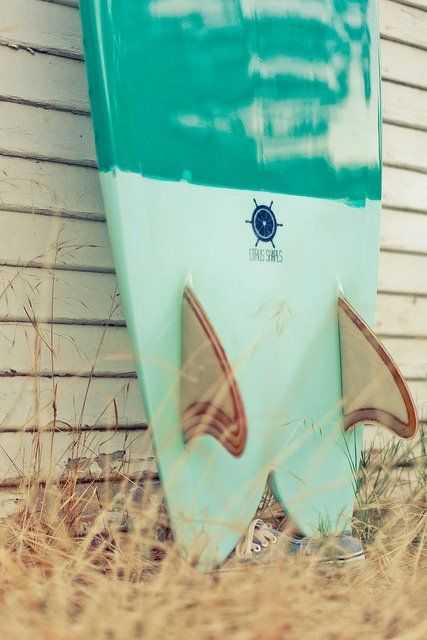 Later on, back in the 1950s, the “Twin Fin” was invented by the legendary Australian surfer and shaper Mark Richards. He changed the design of the classic fish surfboard completely by changing the style of surfing.

He has won numerous competitions and four consecutive world titles thanks to his new revolutionary design.

Then in 1982, Simon Anderson, a young surfer known for surfing giant waves on the north coast of Oahu, was frustrated at not being able to adequately control the twin-fins of Mark Richards. He decided to create the tri-fins or thruster, with three fins of equal sizes.

This creation has surpassed all other fins because it allowed better maneuverability, as well as more powerful turns.

As a result, surfing has grown tremendously since the invention of the thruster fin set-up. Around the same time, the quad fins also appeared, but they have not been as successful as the thruster. 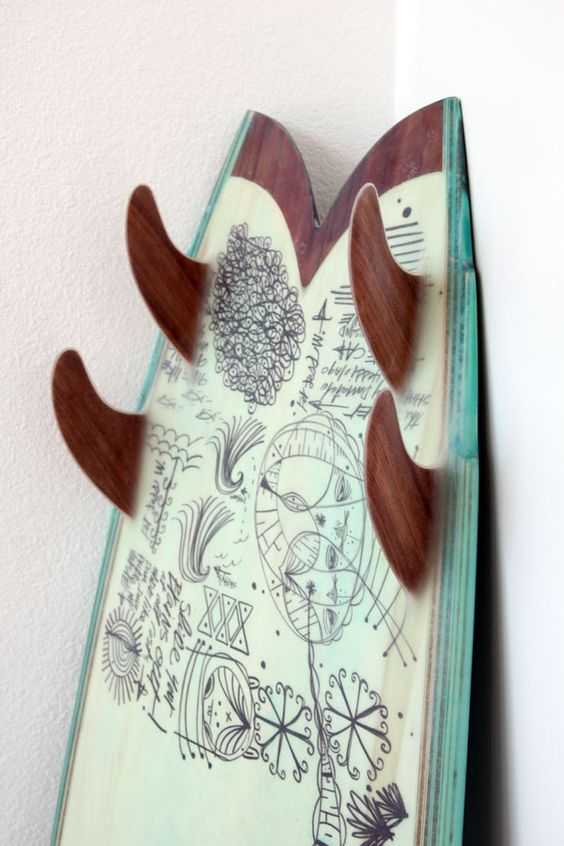 The configuration of the quad setup is four fins, two on each side. The quad setup is often used in shortboards and provides more lift and control of the area near the rails. It has more controlled manoeuvrability and holds more than a twin fin (similar to a thruster).

The quad is a rather versatile version. The quad can also be used in large hollow waves, or in small waves, depending on the cluster placement
There is no center fin, if there is, it’s called a bonzer.

Finally, a bit later, the Campbell brothers invented the Bonzer with 5 fins. The growth in the use of these fins is rather slow, however, thanks to this innovation we can now surf larger and more powerful waves. 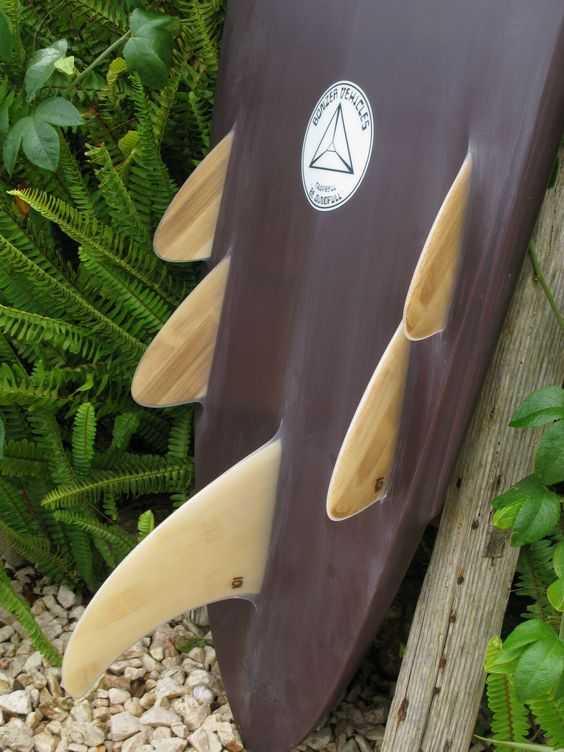 If you like this article, feel free to look at our other pages to learn more about Surfing Etiquette and Surfboard Choice.

Find our surf school and surf camp in Caleta de Famara, Lanzarote, Canary Islands. We are looking forward to welcoming you to our beautiful island!