Our repeating guests often ask for advice about where, in addition to Lanzarote, you can get some high quality waves. Herewith, we would like to announce an excellent opportunity for intermediate and advanced surfers to join our surf safari on the Maldivian South Atolls!

Surf Safari on the Maldives

Why going to the Maldives

The Maldives are famous for its excellent surf, clean waves and crystal clear water. It draws surfers from all over the world. But unlike other popular surf destinations, empty line-ups and a unique opportunity to ride from early morning till late evening are waiting for you in our trip to the South Atolls. 2-3 surf sessions per day are very common. And of course, the amazing Indian Ocean, exotic nature of the Maldives, surfing, fishing, snorkeling, or just relaxing on board of the yacht, enjoying unforgettable sunsets.

Why our surf trip

We know very well where the spots with the best waves are, and we will take you there. Our professional team will ensure great surf and comfort of your stay on board. The yacht itself was repeatedly awarded in Australian surfing magazines with prizes for quality and good performance. Six comfortable double cabins, equipped with air conditioning, private toilet and shower are waiting for you on board. Last but not least, three meals a day, the basis of which will be fresh fish and seafood!

Who will be your surf guides

Your surf guides will be the Captain of the Yacht and Andrey – an experienced surfer and instructor, founder of the surf school Red Star Surf in Lanzarote, Canary Islands. During the surf sessions and video analysis, Andrey will help you to identify improvement opportunities of your style and maneuvers. Once again, this surf trip is not suitable for beginners! Intermediate and advanced surfers only! If you feel, like you ready to rock n roll, we will be glad to welcome you on board!

What is included in the price

Join us today, if you want to score some hardly explored perfect waves. The number of places on the yacht is limited. See you on the Maldives!

Our route through the Maldivian South Atolls

The South Atolls are located about 300 miles south of the capital Male and contain at least a dozen of hardly surfed world-class reef breaks. This zone can only be reached by a well-equipped surf yacht. Waves in the South Atolls are usually much longer and barrel more, than on the Central Atolls. The Gaafu Dhaalu Atolls is where the Southern Atoll’s best surf starts. This region offers plenty of untouched waves, because it’s so far away from the busy Central Atolls, where most surf yachts and surf resorts are. 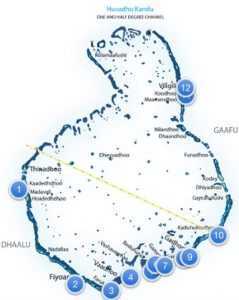 1) You need to get to the capital of the Maldives – Male (MLE). Air ticket purchase is made independently by each participant of the trip.

Make sure, you land in Male September 19th, before 8 pm. The earlier the better, just in case of delays.

2) In the evening of September 19th we will take a plane from Male to Gaafu Dhaalu airport by a domestic airline – tickets are included in the surf safari price.

Your return flight from Male back home (September 29th) should depart earliest around 10 pm, the later the better. Our domestic flight from Gaafu Dhaalu to Male lands at 8.10 pm, and delays are quite unusual, still the more time you have before your connection flight, the better. In case there is no flights at that hour and you have to fly out the next day, we will help you to find a nice and affordable hotel close to the airport.

Upon arrival at the airport Gaafu Dhaalu, we will be transferred to the Yacht. If you arrive later, or want to leave earlier, there is a speed boat option, approx. $ 200 one way. Same, when we return on the 29th of September. Group departure is in the morning.

Cost overview per person for the whole trip

What you should bring